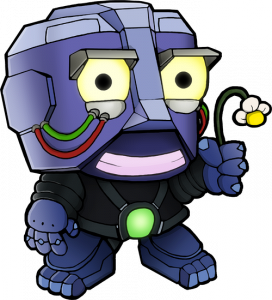 "It's hard to be a metal face. Agent Cobalt has learned as much after finding the Space Exploration Foundation's lost colonization ship The Seed at planet X9CSEC5.5B-blue, Trunkopia. It was once built by a one million strong development team back on Earth, but disappeared merely 30 minutes after its subspace jump. Whatever happened on board during its misadventure, sanity was not invited." - Former slogan for the game; no longer reflective of the events in-game

Agent Cobalt, the main character of Cobalt, is a Metalface MK-1.

Metalfaces are not exclusively controlled by human players, but can also appear as NPCs.

You can customize your appearance through the profile creation options.

Formerly, in the Survival gamemode, Metalfaces could spawn. They used the default colours, and acted like Deathmatch bots.

In Deathmatch and Plug Slam, Metalface NPCs can have different colors, including different eye colors.

Player-controlled Metalfaces have 48 Head, Detail, Hand, Feet, and Body colors to choose from, as well as 19 Eye colors, 49 Lid and Socket colors, and 37 Mouth colors.